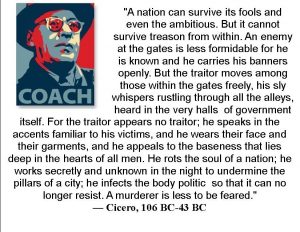 The United States is being systematically and subversively transformed, by key players in positions of power and influence, into something that will soon hardly resemble the nation we have come to know and love.

Ironically, this subversion is being carried out through the use of activist judges, and the far left media. By distorting the First Amendment, the courts are used to choke dissent, while the main stream media propagates lies.

This intentional undermining of our nations liberties has actually been ongoing since September 12, 1905, when Upton Sinclair, Jack London, Thomas Wentworth Higginson, J.G. Phelps Stokes, and Charles Darrow (all prominent men) met above Pecks Restaurant, in Manhattan, NY, for the specific purpose of instituting the overthrow of the Christian world-view in the United States of America.

These men were all disciples and proponents of the teachings of Karl Marx, the founder of Communism.

Through a method called gradualism, which they learned from the Roman general, Quintus Fabius Maximums, they would slowly infiltrate Marxist ideas onto college campuses, “by promoting an intelligent interest in socialism among college men and women.”

By the mid-1930’s their organization, called the League for Industrial Democracy had managed to establish 125 chapters, on college and university campuses, and John Dewey, the founder of progressive education, was the vice president.

Because of the efforts of this small group of men, and their strategic infiltration of our colleges and universities, we have seen the Christian world-view (which founded and shaped our nation), replaced by a secular philosophy which can be traced directly to the teachings of Marx.

For the past thirty years, nearly every major university has been completely taken hostage by hard left, Marxist ideologues.

These are the professors that teach Social Sciences, Biology, Journalism, History, Law, and Psychology. All of these represent the departments that shape the direction of the nation.

If asked, these professors and universities would emphatically claim that they are proponents of free thinking, and expression. Yet nothing could be further from reality.

They see Christianity as being the greatest evil of all time, and the United States not as the liberator of the nations, but the evil oppressor of all that is good in the world. These people are either knowingly, or unknowingly today’s conveyers of Marxist thought.

Is it any wonder, that most of today’s lawyers, judges, teachers, scientists, and journalists, after having been indoctrinated in these schools, predominately lean to the left in their ideologies?

While I realize that there are exceptions to this rule, I would suggest that this is in spite of these schools, not because of them.

To speed this subversion along, we arguably now have the most, anti-American, anti-Christian, pro-Socialist president in our history. His administration is working to give the Federal Government even greater control.

We are witnessing the overthrow of the United States, without so much as a shot being fired?