You are here: Home / The Church / Changing Times 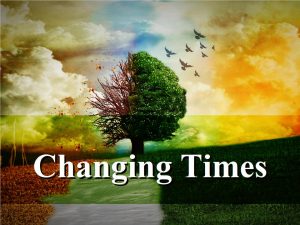 If there is one defining characteristic of the world we live in today, it is the fact that everywhere you look there is more of nearly everything.

Profusion: ‘An abundance or large quantity of something.’ Example: “I was bleeding profusely.” Or it is snowing profusely.

Just take a look at this graph on world population as an example of profusion. The world has gone from 1 billion people in the 1800s, to over 7.5 billion as of 2017. 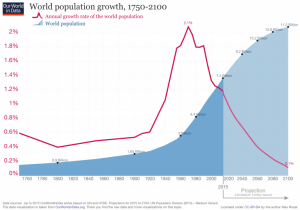 Since the turn of the 20th century the world is experiencing exponential growth that is unprecedented in human history.

This explosion of profusion worldwide has been driven by industrialization, consumerism, technology, progress and globalism.

The following graph gives us a stark illustration of this unprecedented change. 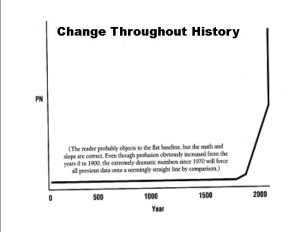 While most of the time, we in the Western world live in willing ignorance to the consequences of this unprecedented rapid growth, its effects are very real, whether realized or not.

These rapid changes are having incredible consequences upon families, society and the church in this hour.

We Have Reached the Hour of Decision

The church in the West will both take heed of the signs and awaken from its’ slumber or continue to decline.

It is apparent that the world is changing in an unprecedented manner.

In his book The Great Evangelical Recession, by John S. Dickerson, he identified four major cultural shifts that will continue to have a great affect upon the American church.  http://evangelicalrecession.com/ http://www.johnsdickerson.com/

The culture is shifting faster than we realize.

“We do long range or strategic planning as though the future were simply going to be an extension of the past.” Tom Sine, Mustard Seed vs. McWorld       http://www.theworkofthepeople.com/person/tom-sine

The United States is shifting into a postmodern, post-Christian era.

Futurist Ray Kurzweil explains the rate of change this way: An analysis of the history technology shows that technological change is exponential…So we won’t experience a hundred years of progress in the 21st century. It will be more like 20,000 years of progress (at today’s rate).

The direction of accelerating change includes anti-Christian reactionism and pro-homosexual.

Dr. David Jeremiah in his book I Never Thought I’d See the Day! Culture at the Crossroads, writes that he never thought he would see the day…    http://www.davidjeremiah.org/site/

“When Atheists Would be Angry.”

“ When Christians Didn’t Know They Were in a War.”

“When Morality Would Be in a Free Fall.”

“When the Bible Would Be Marginalized,” and

“When the Church Would Be Irrelevant.”

Not only is the culture drifting away from Christianity, people (especially the young) are growing increasingly hostile toward Christianity.

In his book Bad Religion, Ross Doughter writes, “In a 2002 paper in the American Sociological Review, [researchers] announced the startling fact that the percentage of American who said they had ‘no religious preference’ had doubled in less than ten years….” By the late 2000’s the same number had quadrupled.                            https://www.amazon.com/Bad-Religion-Became-Nation-Heretics/dp/143917833X

In a 2011 a Chronicle of Higher Education report 39.1 percent of sociologist surveyed said they would discriminate against a job candidate who was evangelical.

While only 26% of Americans 65 and older favor gay marriage, 57% of 18-29 year olds are in favor of it. So with our education system and the media becoming increasingly anti-Christian and pro-homosexual and transgender, evangelical Christians will become even more resented.

The rate of change toward this direction will continue to accelerate as the oldest generations die off.

These changes will reach a point at which they will directly affect church as we know it and life for evangelical Christian as we know it.

Add to these trends a hypersexual culture and you can easily see that America as we have known it is in peril of sinking into the same new anti-Christian paganism that the early church faced in the Roman empire.

The United States produces 89% of all pornographic web pages.

The average age of initial pornography exposure is 7 years old.

The city of Philadelphia has lowered the age for condom distribution to eleven years old, or the fifth grade.

The State of the Declining Church in America

According to the most reliable reports in recent years, the evangelical church in America, that is Bible believing, born again believers is rapidly declining.

Evangelical Christians in the United States have declined to around 7 to 9% of the population.

This means that only about 2 out of every 10 Americans are evangelical, bringing the total number of Evangelical Christians to around only 22 to 28 million of the total population of the United States.

With shrinking numbers of bible believing Christians this means that the church will continue to lose influence in our society.

As the population in the United Stated continues to grow the church not keeping pace.

LifeWay research found that 70% of Millennials (18-29 year olds), quit attending church by the age of 23. Most will never return to church or to Christ himself.  http://lifewayresearch.com/

Barna research estimates that 4 or every 5 young evangelicals will leave the church.

In the past decade 2.6 million 18-29 year olds have left the church, and most will never return.

“There is no easy way to say it, but it must be said, Parents and churches are not passing on a robust Christian faith, and accompanying commitment to the church.” Ed Stetzer

“We are at a critical point in the life of the North American Church, the Christian Community must rethink our effort to make disciples. David Kinnaman

If the current giving trends continue the evangelical church in the United States will lose half of all financial gifts in the next 30 years.

Giving has declined even though Christian’s income has steadily increased.

In 2003 tithing among evangelicals decreased by 62 % from the previous year.

In 2004 the church reached the lowest percentage of giving since the Great Depression.

In 2005 the percentag of giving decreased yet again.

Death of the biggest giving generation.

Christians and non Christians alike over 75 give more four times more of their income than 25-44 year olds.

Percentage of giving by Christians by age groups

We are on the threshold of the greatest wealth transfer in history of 41 trillion dollars. Yet younger Christians and non-Christians give the least amount of any generation in history.

The older generation amounts for only 19% of the national church, yet gives more than 61% of our donations.

A New York Times story about decreased church giving reported: Well before the subprime mortgage crisis threw the economy into a tailspin, warning signs for religious giving were evident. A 2007 by professors at Purdue University in Indianapolis found that baby boomers in 2000 were donating about 10% less than their parents’ generation did at a comparable age in 1973-and almost 25% than those parents, by then aged 62 to 76, were donating in 2000.

These studies and indicators reveal the stark reality that each generation of Americans has become less generous and more self serving, with 18-29 year old giving the very least per income.

The Second Coming of the Church

We can no longer pretend that all things continue as they have, because they do not and will not.

We need a reformation within the evangelical church itself.

A reformation in the manner that the gospel is proclaimed to the lost. We can no longer afford to present a Christianity that is free of cost.

William Carey, the pioneer missionary to India “Let nothing short of radical change of heart satisfy you in your coverts…”

Bill Hull, in his book ‘The Complete Book of Discipleship,’ states, “The American gospel teaches that faith equals agreement with a set of religious facts. Believing in Jesus has no meaning if we don’t follow him in discipleship. Believing without discipleship isn’t believing, it’s agreeing to a set of facts about a religious figure.

The problem we face is that we have taught a faith that doesn’t transform people….We’ve made the test for salvation doctrinal rather than behavioral, ritualizing it with walking the aisle, praying to receive Christ, or signing a doctrinal statement.

We need a reformation in our understanding of what biblical Christianity.

The Barna Group has concluded that the majority of young evangelicals do not know how to articulate their faith. They are unable to explain what they believe. https://www.barna.com/

God exists to make me happy?

In his book Soul Searching, Sociologist Christian Smith writes, that the common creed among American evangelical teens is “Moralistic Therapeutic Deism,” which he defines as essentially a self-centered worldview., in which personal happiness is the highest goal and a distant God is taken for granted in the background. In fact, this view is so prominent that evangelical teens are no less likely than unbelievers to believe that all good people go to heaven.  https://www.amazon.com/Soul-Searching-Religious-Spiritual-Teenagers/dp/0195384776/ref=sr_1_1?ie=UTF8&qid=1516383558&sr=8-1&keywords=christian+smith+soul+searching

“We are at a critical point in the life of the North American Church, the Christian Community must rethink our effort to make disciples. David Kinnaman

“Too many Christians are pew sitting consumers. Up to 80% of some congregations are simply consumers.” Howard Culbertson

“The coming revival is not ultimately that we might feel better or even have a more decent society in which to live. The purpose of revival is to fire the Church with divine energy for her divine assignment.” David Shibley